The Institute for Corporate and Capital Markets Law (ICCML) at Bucerius Law School was delighted to host Prof. Niamh Moloney and Prof. Dr. iur. Dr. phil. Stefan Grundmann, LL.M. for an evening lecture on December 5th 2022. Both speakers delivered an in-depth analysis of the post-Brexit future of capital markets law in Europe.

Prof. Grundmann focused on the development of both company and capital markets law in the European Union. He highlighted that the intensity and the focus of the European legislator evolved over time. Starting in the late 1960s the European legislator first focused on the reliability of companies (blackbox). Here the European Union promoted cross border trade and cross border establishments by relying on academic approaches stemming from institutional economics. Later on, in the 1990s, the focus of the European legislator shifted towards participation of shareholders (redbox). Both the black- and redbox approach can be mostly assigned to company law. Starting in 2010s a greenbox approach was adopted at the European level that tries to promote the idea of corporate social responsibility (CSR) and now has a particular focus on sustainability. This approach tries to use capital markets law as an effective tool to promote the decarbonisation of the economy and to improve social conditions by different means, most notably disclosure requirements.

After a discussion with Prof. Moloney and Prof. Grundmann the evening was concluded with the obligatory pretzels and wine. 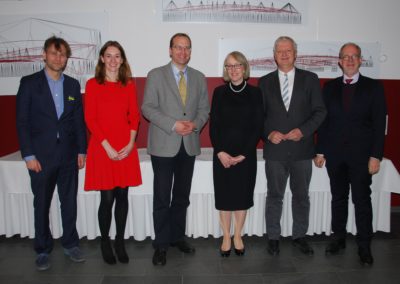