Environmental Social Governance (ESG) has recently been one of the primary topics of discussion, particularly in corporate and capital markets law: Corporations are increasingly being measured based on their ecologically and socially sustainable actions. This is due to many reasons: increased investor demands on sustainable investments; new legislative requirements in various countries, including Germany and at EU level and, finally, the debate about the importance of sustainability in society as such, which is proof of a shifting mindset regarding sustainability in general. Therefore, Prof. Dr. Thilo Kuntz, LL.M. (University of Chicago) managing director of ICCML, decided to make the topic theme to an international academic debate. Initially planned for 2020, the conference had to be postponed due to the covid-19-pandemic but could finally take place in a hybrid format. The set of international researchers and speakers ranged from Japan over Australia to the United States and covered various areas of law, including corporate, capital market, international criminal law, tax, tort and international public law.

The panel was opened by a welcome address of its host, Prof. Dr. Thilo Kuntz, LL.M. (University of Chicago), followed by the presentation of his own research on ESG and fiduciary duties: He stated the breakdown of the shareholder-stakeholder dichotomy and pointed out how there was not only a process of internationalization and transnationalization of ESG-law, but also a shift from soft to hard law, leading – contrary to a common narrative’s belief – to shrinking boundaries of the Business Judgment Rule. Prof. Dr. Alain Pietrancosta of Université Paris I/Sorbonne followed up providing a French perspective on the codification of CSR requirements in company law and the European proposal on directors’ duty of care, by examining and discussing recently enacted legal acts on CSR in France, in particular the Pacte Law. The subsequent presentation of Prof. Andrew Johnston of University of Sheffield explored ESG and workforce engagement in the UK. He emphasized the importance of workforce engagement as a part of ESG and proposed for policymakers to offer an optional company form which institutionalizes workforce participation. The next presentation was given by senior researcher Sergio Gilotta, LL.M. (Harvard University) of University of Bologna on green bonds. He approached the ESG theme from a capital markets point of view and showcased the development of the green bond markets and the major drivers of its growth. Particular importance was given to the problem of greenwashing in the context of green bond and mechanisms for protections against it were debated. Following up was Dr. Kathrin Deckert from Université Paris Nanterre, who gave a comparative presentation on human rights and environmental due diligence and value chain responsibility taking the French, German and European Union legislation into account. The contribution led to an active discussion on whether and to what extent companies should be the responsible actors when it comes to human rights violations. Prof. Dr. Christine Osterloh-Konrad of Universität Tübingen then provided a tax perspective on ESG and specifically criticized ESG rhetoric in that area. She pointed out that corporations should not be perceived as moral agents when it comes to tax matters and therefore had a rather dismissive stance. As a virtual participant of the panel, Prof. Seth Davis of University of California, Berkely School of Law, presented his research using zoom. He gave an overview over the dialectic of civil recourse, Corporate Social Responsibility, and risk management in human rights enforcement in the United States. The last speaker, of the first day of the conference, Prof. Masayuki Tamaruya, LL.M. (NYU) of University of Tokyo showcased the development and current state of discussion on ESG in Japan. He thereby offered explanation as to why such a big economy was such a late participant in the ESG movement and gave reason, why there are signs of a shift in investment and ESG-related behavior.

The next day of the conference was opened by Prof. Jennifer Hill of Monash University and Dr. Tim Bowley, LL.M. (University of Cambridge) via zoom, who addressed the phenomenon of ESG stewardship. They explored the relationship between investor stewardship codes and the growing significance of ESG stewardship in action. Yet again talking from a capital markets perspective, Prof. Sofie Cools, LL.M. (Harvard) from University of Leuven – drew the attention to the details of ESG activism. The subsequent presentation was given by Prof. Dr. Jan Wouters from University of Leuven, who expounded ESG related questions in international public law. He pinpointed the instruments of the international regulatory framework in relation to ESG approaches and how those were the outcome of cooperation between public and private actors, informal actors as well as international organizations. Prof. Cedric Ryngaert and Martine Jaarsma of Utrecht University followed-up and added an international criminal law point of view to the panel. They examined whether international corporations indirectly contributing to human rights violation could be prosecuted on the basis of international criminal law. They argued in favor of international criminal liability based on the example of the Russian central bank and the war between Russia and Ukraine. The conference was concluded by the presentation of Prof. Dr. Andreas Engert, LL.M. (University of Chicago) from Freie Universität Berlin, whose topic was ESG metrics, the means to assess a corporation’s exposure to a range of ESG-risks.

The international conference led to lively discussions amongst the scholars, resulting in an intensive comparative exchange on ESG matters covering multiple areas of law. The paper that each of the speakers prepared as the basis for the academic discussions will become part of an even bigger project: An international research handbook on Environmental Social Governance. 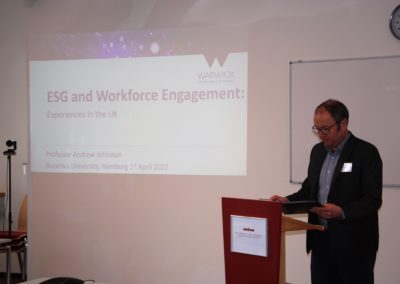 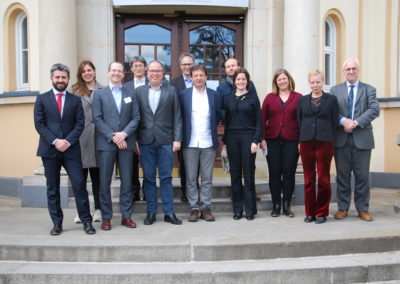